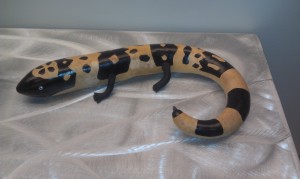 Gila monsters are found in the SouthWestern United States. The states include Arizona, California, New Mexico, Utah and Nevada. There are several deserts that span this region and these include the Mojave and Sonora. Gila monsters are lizards and are often called beaded lizards that prefer rocky areas & tend to avoid large, open areas. In these rocky areas they will find burrows & spend large amounts of their life in them. Living in a burrow helps them avoid the extreme heat during the daytime & the cold night. They will eat whatever they can when they can in an effort to store up fat for when it is harder to get food. These lizards just like snakes need to be left alone and relocated if possible.

This little piece of artwork is on exhibit at the Chandler Environmental Education Center. Check the schedule calendar on the left side of home seal for dates for the Bug Zoo – 3 – 6 year olds.