What do you know about Formosan Termites?

What do you know about Formosan Termites?   For example did you know, that they were probably transported into the U.S. from East Asian countries after World War II. The Formosan differs from native species in the fact they have huge colonies, maybe in the millions while Eastern Subterranean often have just a million and Arizona Western Subterranean often near 250,000. The East coast termites generally swarm in the Spring while the Western Sub species usually wait until monsoon to become more active. Formosans are just a little bit different in the fact that they are Subterranean but can bring mud up into a structure and live without going back to the ground. Our native termite in Arizona is not up to par with the Formosan in damage however it is still destructive and can cause significant damage if left alone. So what can you do to prevent Subterranean termites? 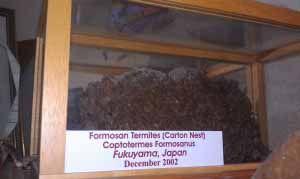