Why is it important to keep out the bugs and rats?

From almost the dawn of man, rodents and bugs have been trying to stay close to us. Why you ask, I think the main reason is that we tend to want to stay dry and we collect things like food. Animals, bugs and us want the same things:

With that movement came pest control, OK a version of it somewhat. When early man found Bat Bugs they might have thought of moving or washing the antelope skin they were sleeping on. Da da pest control, we might never really know who was the first to step on a bug but Pest Control it is! 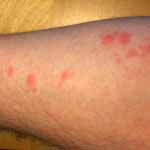