Dinosaurs and cockroaches – did you know?

Dinosaurs – Nobody pays attention to the little guys, right? But when there is BIG stuff there has got to be little stuff. Somebody has to break down leaves into compost so the trees can produce leaves which those non-meat eaters are going to munch on.

Actually cockroaches have been around for 250 million years or more. The early cave dwellers probably encountered them often They probably co-existed with bats and other animals in caves. More of a symbiotic relationship, maybe just maybe that is the first time a person told another to get the bugs out of the cave. Da da Pest professional is born. 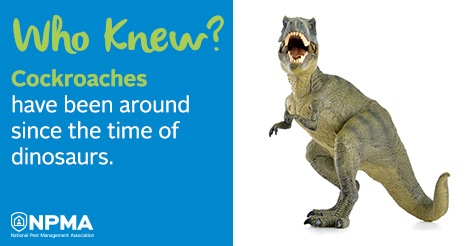