All posts in “bees” 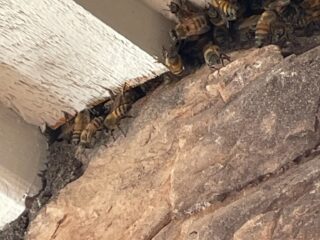 Comments Off on Honeybee Danger

As I have mentioned in previous blogs, it is very important to check your home inside and outside monthly. If you have our service, we meet you at the front door with a giant broom. It is intended to make the techs look up and to dust down spiders webs etc. The bugs originate outside for the most part. 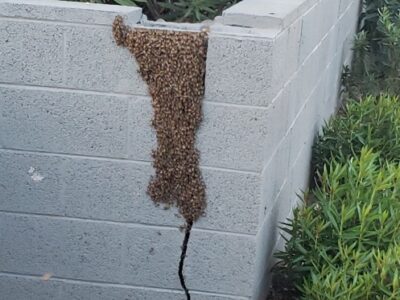 Comments Off on Block walls

Block Walls can harbor a variety of bugs, especially scorpions and their food. So treating the block walls inside and outside is essential to making them dead. The art od pest control is to manage the bugs so they die before they get to your home or business. So how do we treat?

Comments Off on Entering bugs

Entering bugs like scorpions, roaches and whatever else can enter.

Entering termites, scorpions et all. Termites can make their way through the smallest of a crack or hole. Scorpions can enter under a door, or a  crack under a window or fireplace. Home-sealing is the absolute best method to keep them out, second to that is pest control and third is black lighting your property frequently.

One call to do it all, 480-831-9328 ProBest Pest Management. Sounds like ProBest could be in the wizardry world, nope nothing magical we just know our business. We train often, we read and attend seminars to be up to date on new products. What makes us different is our knowledge – 2 staffers who are A.C.E. Associate Certified Entomologists. 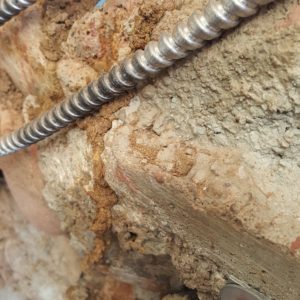 Comments Off on Stung

Stung by a bee or ant?

Stung lately? Bee or ant stings are quite painful and I’ll tell you they can hurt. Bee stings can continue to pump venom into the area so it’s very important to remove the stinger quickly. Also important is not to squeeze the venom sac, this could put more venom into your skin.

I recently ran into a product called Stop Ease, it greatly helps to alleviate the pain. Here is some info from the Mayo Clinic on stings. As always check your property monthly, when hiking make sure you are familiar with exit routes. As always BEE careful. 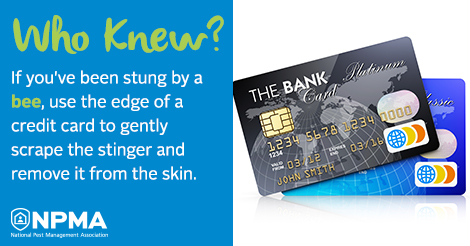 Comments Off on Bees need water

Bees and all creatures need 3 things, water, food and shelter. It is very important for all creatures and with very few exception it is Life and Death. Some creatures can take water directly from the food they eat. Mice and termites are just a few.

So what do you do when they invade your space, adapt of course? We have tried moving a dish of water away from a pool or putting in a fountain to distract them away from the other water source. Most times the honey bees won’t sting, but why tempt fate, right? Imagine coming up from under the water and bee is on your face or head and they decide to randomly sting (rare). So we have tried the water dish and or fountain idea to motivate them away. These little bees were just going ahead with their business and unprovoked would never bother anyone. I often see bushes full of flower that almost come alive with honeybee activity – “leave them bee and they will leave you bee”.

I have a large account and they have a huge fountain and there are days when they are really active. I also know that most people are not familiar with bees like I am but just be nice to them and they will generally leave you alone. Remember one out of every mouth full of food relies on honeybees, we really need them to do their work. They are also the only insect that supplies us food. Something to really think about. 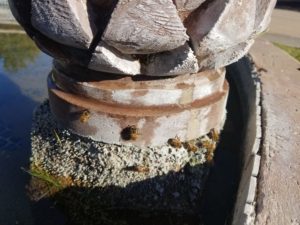 Comments Off on Fountains and bees 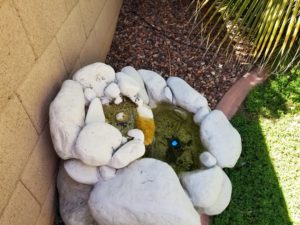 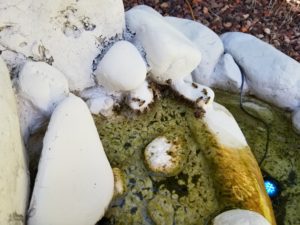 Comments Off on Honeybees in your home do I have to open up the walls? 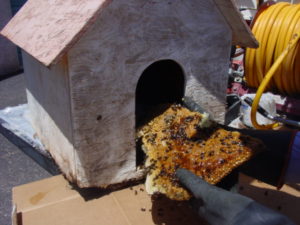 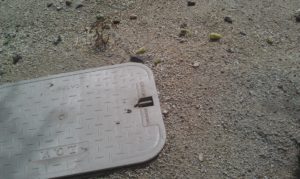 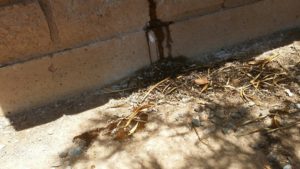 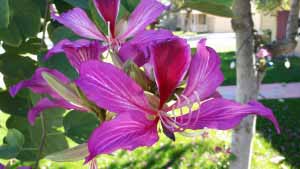 I think this is a Orchid Tree, Bauhinia variegate. The honeybees were going crazy, it sounded like a whirling buzzing noise and the tree was covered with bees pollinating.

When the bees are out gathering nectar and pollen generally speaking they will not attack, if you bother them or swat at them they may defend and sting you but they are not in hive defense mode. A lot of people panic when they see a few bees on a tree or bush, the honeybees are just there to gather the fruit of their labor. The same goes with water areas, this could also be your pool or water fountain. Swarms occur and should be left alone, they will probably move on. Let them be and more than likely they will leave you be. We as humans can come into contact with bees daily so just take care and if you notice them coming and going from your home – just check them out and see exactly where they are coming from.

One of my favorite shows – Shark Tank

Comments Off on One of my favorite shows – Shark Tank

So the other day I was watching “Shark Tank” and was really intrigued with a young eco-entrepreneur Henry J. Miller (his words). Check out his Honey with spices Webpage and FaceBook page or his Twitter page.

I understand the role of honeybees and I understand the risk they pose to the general public especially in the South. We sell honey in our little store and I think this idea from Henry is great – so please visit his site and if you can why don’t you give his honey a try.

Beeswax artistry, what do you think?

Comments Off on Beeswax artistry, what do you think? 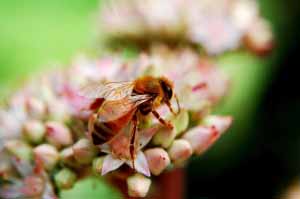