All posts in “concrete”

Termite tube in my carpet?

This picture is a termite tube coming up through the carpet, so termites work 24/7/365 and they won’t stop until they find food. Even if they find food, their search continues to the next food source. So occasionally they will enter through a crack in the concrete, so you need to look against the wall and inside the house. As always you can always call upon the best to look for these little girls. “Call A Pro… Call The Best. ProBest. 480-831-9328

By the way, now is a good time to look for termites in Arizona.

Look for tubes outside on the foundation.

Look for either drop tubes or tubes coming up from the soil or concrete carpet areas.

I see a lot of tubes in garages, so focus on garage along the outer walls. 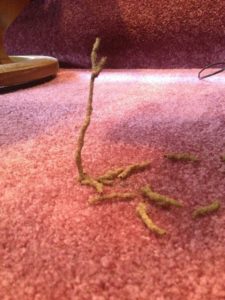 Our Active Arizona Termites like water and there generally isn’t a lot of it for them.  So after it starts raining they get a little more active. So keep a sharp look out for them. Arizona termites are sneaky. They often follow lines such as this metal bracket or they will follow concrete lines and or pipes. So what should you look for? 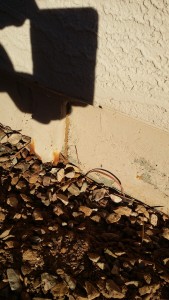 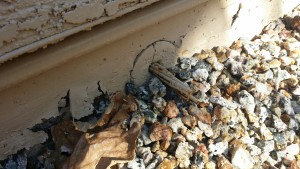 Normally I have noticed that they cut the extra cable and fill it in with cement. Post tension slabs, pull the concrete together by cables within the concrete. This helps to keep the concrete tight and prevent the concrete from cracking.

Termites and their search for food 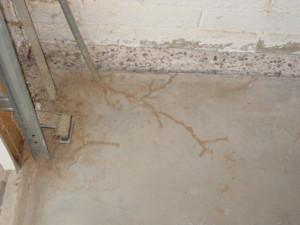 Workers are the main caste in the termite colony for the digestion of cellulose in the food and are the most likely to be found in the infested wood. Workers are out and about 24/7/365 and constantly searching for wood.

What is under your concrete? 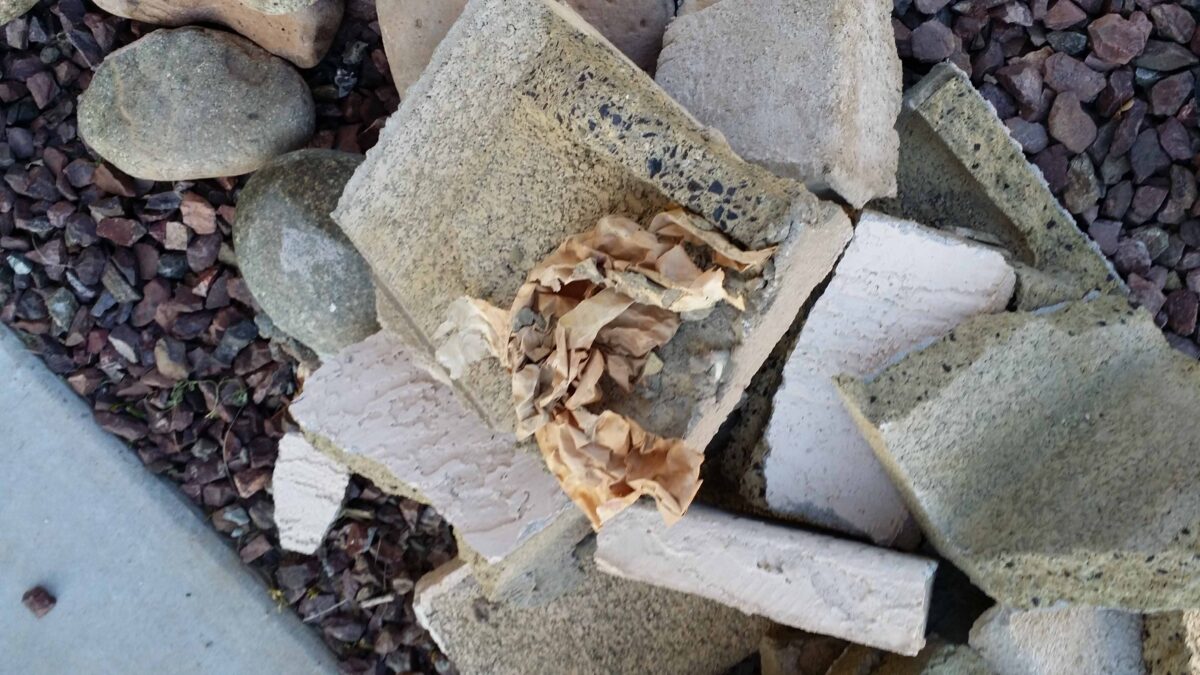 One of the problems with doing termite work is what is under the concrete. The picture above isn’t under concrete but in a block wall holding up a RV gate. The problem that I have run into is cups and trash that were just thrown in before the concrete was poured. Cups are a real problem because they are coated with that waxy material and takes a zillion years to decompose.

A number of years ago I had an issue with a set of steps and finally after taking it apart we noticed trash, wood and cups which prevented the termiticide from reaching the dirt in a uniform way. Love to be Superman, but I can’t see through concrete. 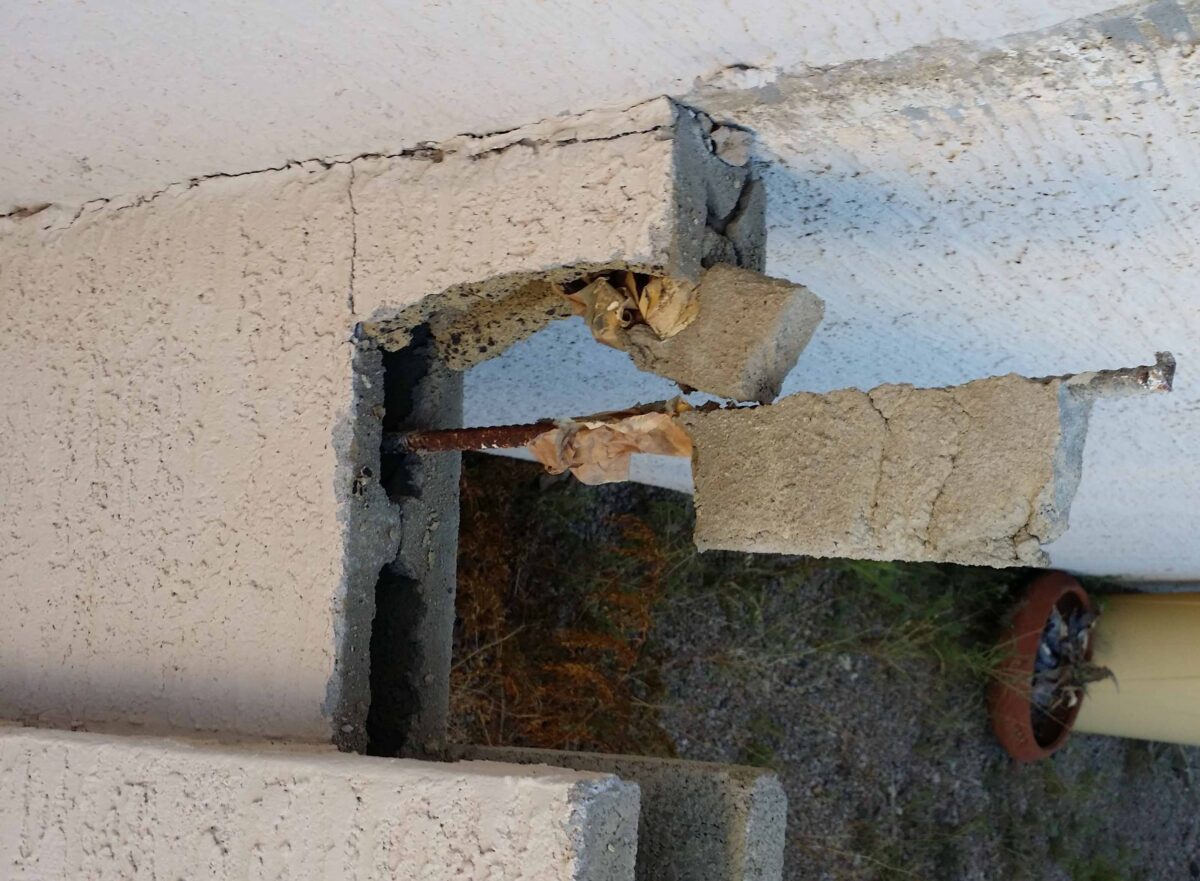 This is what happens when patching termites drill holes goes extreme. Patching termite drill holes should be limited to the hole not all the area around the hole. I caught this at a business site the other day and just thought it was amusing and actually sad.

This is on pebble tech flooring, but so easy to just work a little smarter to blend in and only allow concrete to be in the hole not everywhere else.

Hot, Hot and really Hot – did you know this? 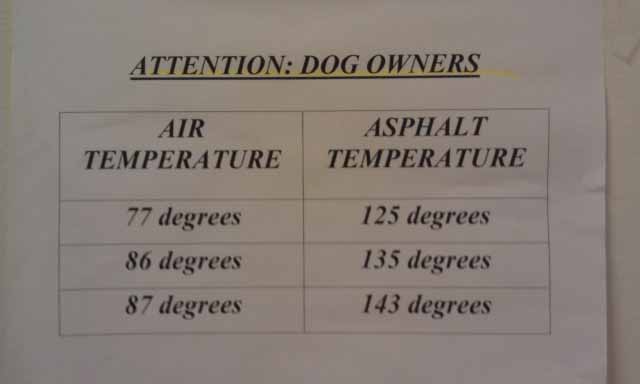 This sign was posted on the door to myVeterinarian Office and I thought I had to post this and pass it along. It wasn’t designed for Arizona I’m guessing, cause it should read 115 – don’t even think about walking the dog. The dog would explode into flames. I know not allot of  people think about things before they do it, so please remember the sign – the concrete or asphalt is HOT.

Termites are active now in Arizona

Termites are small, white, tan, or black insects depending on their caste that can cause destruction to wooden structures. I always suggest a termite inspection if you are purchasing a home or at least an inspection every few years just to be safe.

After determining the infestation a treatment is necessary to keep them out, this is done by generally placing a termiticide into the soil next to or under the foundation. This is better done by a termite professional because it involves drilling and placing the termiticide under slabs of concrete. I often see termite tubes in garages and specifically in the area of the expansion joint (as noted by the first picture).

What’s hiding under your bathtub! 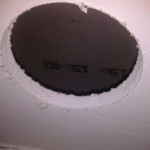 Its not always easy getting to a possible infestation from termites, but you have to do what you have to do. Sometimes there are breaks in the concrete where pipes come up. Finding the termites is esential to the cause and must be solved before leaving the job.  Never give up! 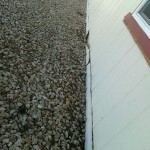 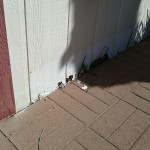 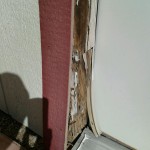