All posts in “ProBest Pest Control”

Bats are great and need your love. Here are a few facts & tips:

What can you do to prevent them from making your home theirs and to encourage them at your home.

Never pick up a bat, they do bite!

This is one of my absolute favorites places in Arizona. Prescott (natives say Prescitt) served as the first territorial capital in 1863 and the courthouse  is worth a tour. Across the street is the historic section (Whiskey Row) including a saloon with gun-slingers present from time to time and occasionally there are events surrounding the area of the courthouse. They host wine tasting events and art fairs with some rather different and interesting art collections. Check out the Palace Restaurant & Saloon and Prescott  Brewery Company for some great food and extras.

Having been around the world, a desert is often thought of as just a dead heatwave of a place. Our Spring is certainly different but the flowers and cactus all take a spot at blooming. Many birds, bugs and honeybees pollinate the flowers and the Native Americans use the flower as a jam, jelly or even using the plant itself in specialty food products. Cactus and many species of trees have adapted at having spiny or really thin leaves to reduce water loss, so be careful of those spines. 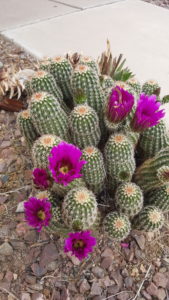 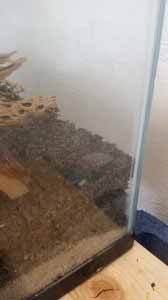 Have you seen coyotes in your neighborhood?

The other day I rounded the entrance to my cul-de-sac and two coyotes ran out in front of my truck. This isn’t the first time that I’ve seen a coyote but is does concern me about the pets in the neighborhood. I live in the City of Phoenix, not in a rural section but a established community that has been there since the 1980’s. So why would there be coyotes in this section of the city? Coyotes thrive just about everywhere in the U.S., I think because it adapts and will eat almost anything.

Coyotes are most active at night and early morning, when there is little interaction with humans they may hunt throughout the day. I think they look cool and are similar in general appearance to a dog such as a collie. But remember they are wildlife not pets, do not feed them it will only cause more issues.

So what can you do to prevent them from frequenting your home or backyard, I’ve seen them jump gates over 6 foot high? Installing  higher fencing can help but adding this may not serve to prevent that ambitious or mischievous one from getting in. If you live on a farm or acreage with animals, you may have to get serious and install electric fencing or change the property. There are also noise machines, lighting and the use of a good size dog may be enough to scare them off.

How tough is it to control House Dust Mites?

First off let me address this from the very start, House Dust Mites are not a pest control issue. We deal with them in connection with Bed Bugs from time to time and really only as a matter of mattress or box spring encasements. I wanted to address this bug in that manner, encasements are the way to go with this bug.

Our homes are their homes, they love human and pet dander or skin flakes. This debris will fall everywhere, carpets, bedding, furniture and furniture. This dust or debris will become airborne and vacuuming is essential in keeping things in check. Along with cockroach skins and dust mites excrement may cause asthma or breathing issues.

Encasements are a great way to protect your mattress or box spring investment and keep the dust mites out. Control is possible but it is a ongoing management concern.