Panic may be involved with bugs. There are a lot of bugs out there folks and we as humans have aversions to many of them. I met a lady awhile back that absolutely was terrified of crickets, mine is spiders. They just look creepy and with all those eyes staring right back at you, you see my point. The one we really should be scared to death is the mosquito, this little bug has killed more more humans than anything else.

What is your phobia?

Is it snakes, spiders or cockroaches? There can be other forms which may include the mere thought of the bug or animals. I’m sure I mentioned this before but just in case I haven’t – this guy had roaches in the toilet and I couldn’t spray so I just reached in and grabbed them – he went running. He was just freaked out but for me I was fine with that, but if that had been spiders – hell no! So don’t underestimate the fear, that is why Dr. Bug is here. 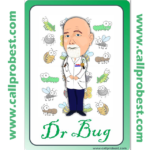